is a fundamental device in PV panels that converts solar energy into electrical energy through Photovoltaic effect.

Photoelectric cell (Solar cell) is defined as a device whose electrical characteristics such as current, voltage, and resistance vary when exposed to light. Individual solar cell devices are often the electrical building blocks of photovoltaic modules, known as solar panels. Solar cells are a promising and potentially important technology and are the future of sustainable energy for the human civilization.

The first generation of solar cells was produced in silicon wafers either using monocrystalline or polycrystalline silicon crystals. 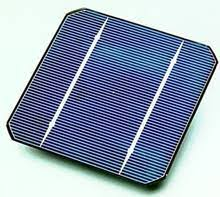