is an electronic device that turns DC voltage into AC voltage.

Central inverter: is a type of inverter with high capacity; it is related to a string inverter. However, central inverter is a large and thousands of solar panels are connected to it in a very large utility scale installation. 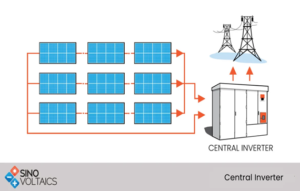 String Inverters: is a device connected to solar array to convert direct current from solar panels into alternating current that is used in our homes and business or exported to the grid.

Micro Inverters: These inverters are also known as module inverters because each DC module is connected to each microinverter. The output of all inverters is combined and fed into the utility grid. 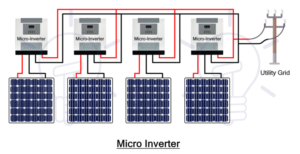