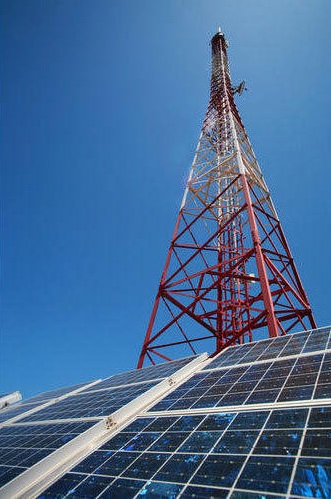 With AFSIA member Inspired Evolution having blazed a trail for the use of solar energy to power telecoms towers, French peer Camusat recently announced a €60 million project to ‘solarise’ its mobile phone masts.

Announcement of the Camusat finance – which will be used to install solar panels at the company’s telecoms towers via its Aktivco SAS investment vehicle – comes in the wake of Cape Town-based Inspired Evolution launching its $35 million ESCOTEL business in December, to solarise around 900 Orange mobile phone masts in Sierra Leone, Liberia and, “over time,” the Democratic Republic of Congo.

The moves represent a realisation of the carbon reduction opportunities offered by Africa’s telecoms masts, which typically lean on diesel and/or lead acid batteries to operate when patchy grid electricity supplies are unavailable.

Under the terms of that arrangement, according to Norfund, Sagemcom will also provide equipment; engineering, procurement and construction services; and operations and maintenance of the power systems, which will be installed at towers owned by the Paris-based Orange telecoms company in which the French state is the largest shareholder.

Norfund is also involved in the Camusat-Aktivco announcement, to the tune of €9 million, and will be joined in the FEI-led funding round by French Development Agency-backed Proparco, which will contribute €16 million of investment; and the AfricaGoGreen fund financed by German development bank KfW.

With Aktivco owning 3,000 telecom towers, and aiming to have 10,000 by 2025 – according to the Africa Global Funds report – the total, €60 million cash injection for solar energy systems will expand the wave of solarisation into more African states.

FEI, which is leading that earlier funding round, was set up by the African Development Bank under the New Deal for Africa initiative which received equity backing from KfW and Norfund, and a loan commitment from the Austrian Development Bank. The AfDB contribution to the program was made on behalf of the European Commission and the World Bank-administered Clean Technology Fund. FEI is managed by Lion’s Head Asset Management, part of London-based investment bank Lion’s Head Capital.

Those two big mobile mast announcements are reflective of a wider move to use solar, rather than diesel, to power Africa’s telecoms towers, in a move which could benefit PV installers and equipment suppliers across the continent.

The IHS Towers business established by American entrepreneur Sam Darwish in Lagos in 2001, claimed 42% of its more than 27,800 telecoms towers – installed across five African states – had solar power “available to them,” in the company’s 2020 sustainability report.

By AFSIA’s reckoning, that would amount to solar capability at 11,676 or more masts across IHS markets in Nigeria, Cameroon, Ivory Coast, Rwanda and Zambia. The company also said it had installed the first 30 of its rural telephony project masts in Nigeria last year, all powered by solar-plus-battery-storage, with the latter largely lithium-ion systems.

Boston-based American Tower Corp has pledged to have 5,000 “solar-assist” sites by the end of next year, which would amount to 20 MW of solar generation capacity; and UK-owned, Mauritius-registered Helios Towers has promised a carbon reduction strategy this year and reported, in its 2020 sustainable business report, that 481 sites – 7% of its tower estate – used solar power by the middle of last year. Helios can already claim its business model of hosting multiple telecoms clients on each of its towers is fundamentally inspired by energy and infrastructure efficiency.

The Eaton Towers telecoms business based in London owns more than 5,000 masts in Ghana, Kenya, Uganda, Niger and Burkina Faso, and is likely to offer its own solar opportunities given the pledge made by Ohio and Dublin-headquartered parent company Eaton to go carbon neutral this decade.

While the telecoms industry made be arriving relatively late to Africa’s solar revolution, the signal strength of its intent to go solar appears to be excellent.