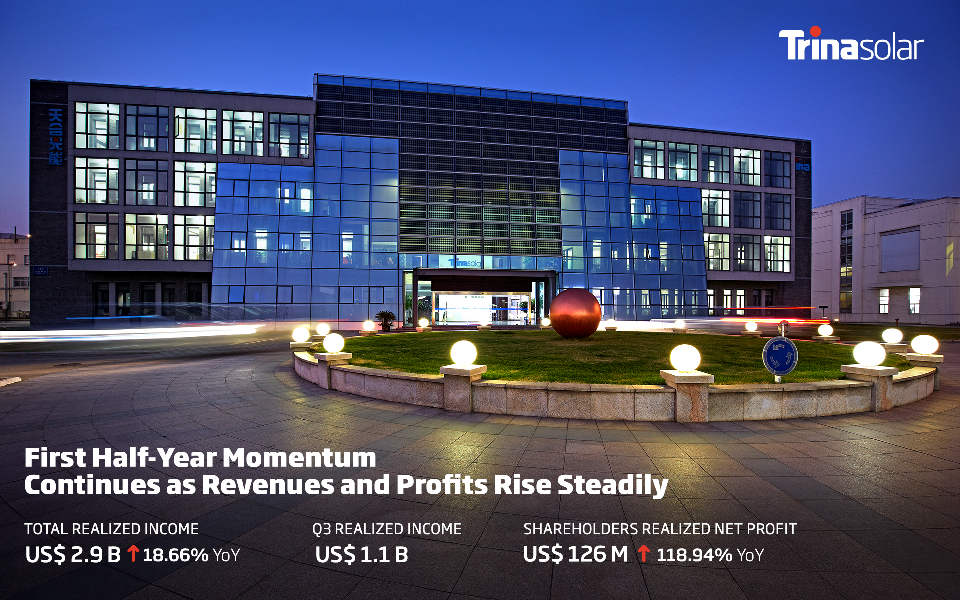 Trina Solar Co., Ltd. (688599) today released its third-quarter reports for 2020, revealing that first-half momentum has held up, with revenues and profits both rising steadily. In the first three quarters, the company reported total realized income of RMB 19.93 billion, a year-on-year increase of 18.66%, with third-quarter realized income accounting for RMB 7.38 billion. Shareholders enjoyed a stake in realized net profits of RMB 832 million, a year-on-year increase of 118.94%.

Jifan Gao, chairman and CEO of Trina Solar, said: “Since the start of the year, the PV industry has faced various challenges and considerable market turbulence. All of our Trina people are united in their commitment to creating value for customers based on a strict customer-centric approach. From market insights through to strategic adjustment and implementing feedback, we are now faster, more efficient, and have realized sharp gains in performance, so growth remains strong.”

Antonio Jimenez, Managing Director and Vice President, Trina Solar Middle East & Africa commented: “We take pride in our success as it shows our commitment to bringing technological revolutions in the photovoltaic industry and contribution to the sustainable development of the solar industry globally and specifically across the Middle East and Africa. We always strive to accelerate the adoption of solar power in the region, reduce overall costs of power consumption, and add value to our customers and benefits to the communities we operate in.”

February this year marked the global release of Trina Solar’s 500W Vertex ultra-high-power module series, the output of which was subsequently upgraded from 500W+ to 600W+ in just five short months. To date, the company has received signed orders for over 2GW of Vertex modules from its major global markets across Europe, Asia-Pacific, Latin America and the Middle East. All domestic orders have come from top-ranking Chinese electric power developers. Committed to pushing future boundaries, Trina Solar expects total production capacity of its ultra-high-power Vertex modules to hit around 22GW by the end of 2020, with a state-of-the-art 210-focused production setup forecast to be in place in 2021.

Trina Solar’s 600W/550W ultra-highpower Vertex module series has been approved in full-series reliability tests by TÜV Rheinland, and certified to IEC 61215 and IEC 61730. In a further boost to the market competitiveness of its products, recently Trina Solar was also received the world’s first IEC 62941:2019 photovoltaic module manufacturing quality system certification from TÜV Rheinland

Early in the third quarter, Trina Solar signed a deal with The Rise Fund, part of one of the world’s largest alternative asset management companies, TPG Group, for project contracts accounting for almost 1GW in total. Included in the deal are 35 overseas PV plant projects across Europe and Latin America, specifically Spain, Chile, Colombia and Mexico. The projects are worth around US$700 million in total, some 20% of which will be realized income in 2020, with the remainder to be realized by instalments in 2021 and 2022. This innovation-based commercial model, in which the project package is sold integrated and in bulk, reflects Trina Solar’s successful venture into overseas project development, and underlines the company’s leading status in key overseas markets.

In early September, Trina Solar became the first Chinese PV company to acquire an overseas tracker mount business when it bought up the remaining equity in a Spanish tracker mount manufacturer. With the ongoing growth of the tracker mount market and its own growing penetration rate, Trina Solar will continue to seek coordinated and optimized integration of its high-power modules and PV tracker mounts in order to create greater value for customers.

The cells part of the business will see Trina Solar invest close to RMB 3.8 billion in the construction of the “10GW High-Efficiency 210mm Large-Size Solar Cells” project. Cell production capacity is projected to reach around 26GW by the end of 2021, some 70% of which will be accounted for by 210mm large-size cells.

Looking ahead, Trina Solar will continue to scale up from this basis, collaborating with partners on new installations, new technologies and new processes to achieve further breakthroughs for the PV industry by raising efficiency and lowering costs, while making new contributions to mankind as we approach the age of zero-carbon energy.

Trina Solar Co., Ltd., founded in 1997, is a world-leading provider of smart integrated photovoltaic (PV) solutions. The Company’s business spans the research and development, production and sale of PV modules, power plants and system products; PV power generation and operations and maintenance (O&M) services; the development and sale of smart microgrids and multi-energy systems; and energy cloud-platform operations. In 2018, Trina Solar pioneered the creation of an energy Internet of Things (IoT) brand, joining forces with the most advanced companies and research institutes in China and overseas to establish the Trina Solar Energy IoT Industry Development Alliance and the New Energy IoT Industry Innovation Centre, in addition to a New Energy IoT Research Innovation Platform. Through this energy IoT ecosystem, co-founded with multiple partners, the Company is committed to becoming the global leader in smart energy. On June 10, 2020, Trina Solar listed on the Shanghai Stock Exchange Science and Technology Innovation Board (STAR Market), becoming its first PV company dealing in PV products, PV systems and smart energy. For more information, please visit the Company’s official website: www.trinasolar.com