The company’s ranking includes all EPC activity for PV projects above 4 MW in size that have been deployed over the past year at the global level, outside of China. 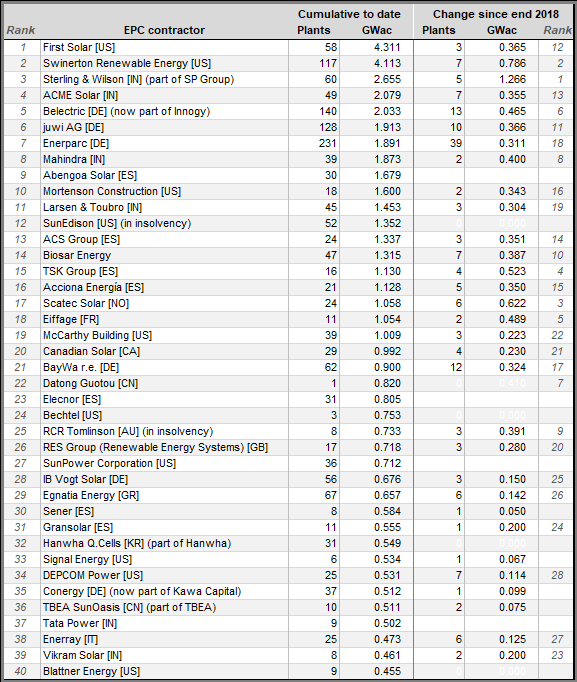 The second position is occupied by U.S.-based Swinerton with another 4.1 GW, followed by Indian contractors Sterling & Wilson and Acme Solar, with 2.6 GW and 2.0 GW, respectively.

Germany’s Belectric, Juwi, and Enerparc occupy the next three positions in the ranking, with 2 GW, 1.9 GW, and 1.8 GW of deployed PV, respectively.

“Four of the top 11 companies are based in India,” said Wiki-Solar CEO Philip Wolfe. “This reflects not only the strength of the domestic Indian market, but also the fact that companies like Sterling & Wilson are now prominent in bidding for projects elsewhere – such as the world’s largest single plant at Sweihan in the [United Arab Emirates].”

Wolfe said that success in overseas markets has similarly allowed leading German companies such as Belectric, Juwi, Enerparc and BayWa r.e. to remain high on the list, even as their home markets have stagnated.

“Spanish EPCs too have remained active internationally and can now be expected to climb the table as their home market revitalizes,” Wolfe stated. “First Solar, which has now largely discontinued its EPC activities, may well lose its #1 position this year,” he also said.