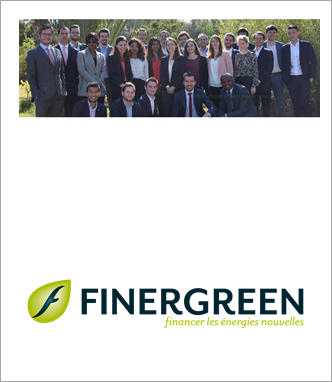 Finergreen continues its international growth strategy: after Abidjan in 2016, Singapore in 2017
and Dubai in 2018, the financial advisory boutique is expanding to Latin America and the
Caribbean with the opening of an office in Mexico; and strengthens its position in East Africa
by setting up an office in Nairobi.

Finergreen, a financial advisory boutique specialising in the renewable energy sector, has become
a key actor on the international stage in just a few years.
With a dozen nationalities represented and a workforce that has doubled over the past three years,
Finergreen relies on a multi-cultural team able to advise its customers on all five continents.

Finergreen opens a new subsidiary in Latin America
In this context of geographic development, Finergreen decided to deploy its activities in Latin America.
For that purpose, the company chose to set up in Mexico City and recruited a team led by José Carlos
Marrón, who gives details about how he came to work at Finergreen: “after a successful experience at
PwC, I wanted to dedicate myself 100% to renewable energies. I was seduced by the entrepreneurial
dynamics of Finergreen. The company combines both agility and professionalism, two key qualities for
investment banking activities.”
The company aims to become a key actor in Latin America and shows a promising start as it meets a
real market need, as its founder Damien Ricordeau explains: “our positionning in the region meets
different identified needs: 1) to structure the projects’ financing whether they are based on merchant
contracts or on a PPA, 2) to set up strategic alliances between actors (creation of joint-ventures, M&A
transactions, capital increases) ; and 3) to bring in-depth financial expertise through various missions:
modelling, valuation, financial audit, etc. Several operations are already ongoing in all three types of
missions. The first ones will come to a close within the next few months.”

In parallel, Finergreen strengthens its position in East Africa
Keenly aware of the specificities of the African continent including the need for electrification in many
areas, Finergreen chose to be as close as possible to the projects by setting up a team dedicated
exclusively to this market.
Based in Abidjan since 2016, the Finergreen Africa team, led by Jean-Jacques Ngono, rapidly
expanded and adapted to meet the many needs of the market: “We intervene from the early
development on, in order to bring the projects up to international standards. Beyond our natural ability
to secure financing (equity, subsidies, bank debt), we are very active in the financial engineering of both
on-grid and off-grid projects with complex technologic issues”.
Finergreen supports both institutional actors and developpers of local and international projects. The
importance of a local presence and of developing local expertise is what led to the opening of a second
office in Narobi, Kenya: “East and West Africa are two different and poorly connected ecosystems,
which is also true for their energy sectors. Opening an office in Nairobi will allow us to both provide a
detailed understanding of the local context and put our international network at the service of our clients
to bring them the best value” explains Florian Cammas, in charge of the Nairobi office.
Providing a local expertise and international financing solutions is the essence of Finergreen.